A lot of birds prefer flowing water to drink from and a manual system in a domestic environment is simple to install.

A tray is used to collect the water which also gives the birds the opportunity to bathe. A paint roller trays is ideal as they have a slanted base which gives the pool a shallow and deep end. This is fitted with an outlet tube near the top. The inlet tube is fixed to the wall above the tray with the end a couple of inches above the water. Place this near to a rim to allow the birds to drink from the flowing water. A filter is placed in the tray itself to prevent debris from blocking the outlet tube. This consists of an "OSCO" pencil pot laid on its side and is available from stationary stores. It is a small cylindrical can made from wire mesh.  The water flows from the outlet tube into a bucket on the floor. Flushing of the tray is achieved by pouring water into a funnel fitted to the other end of the inlet tube which should be a fair distance from the tray so that the birds don't feel intimidated: It may be necessary to stand on a ladder because the  funnel must be a least a metre above the tray to ensure proper flowing.  Flush once or twice a day and clean the tray once a week. 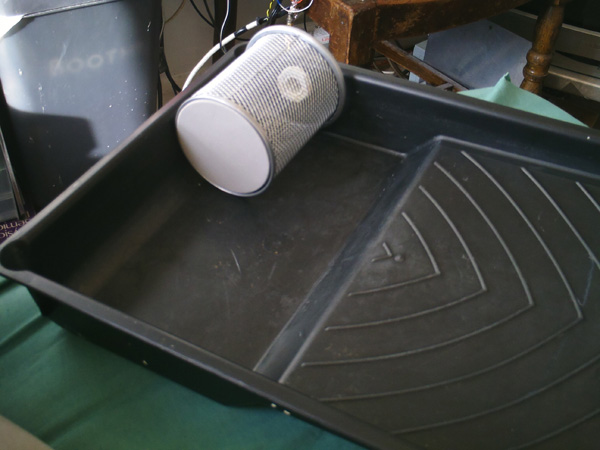 Fit the centre of the tube about an inches below the rim of the tray using a cable gland - this one used the JR76H from MAPLIN but has been discontinued. An alternative gland is available: The UP89 which requires a 16mm hole and ought to be just as effective. The gland accepts tubes up to 10mm diameter - use the largest tube available otherwise you may get problems with overflowing. Larger size glands are also available. The mesh filter is placed in the deep trough with the open end against the outlet hole. It is fixed in position by a couple of large rocks which jam it against the sides. If using this method of fixing be sure that it is stable by lightly attempting to wiggle it. An alternative is to fix it down with wood glue. However this has never been tried as the rock method  proved adequate in practice: A large wedge shaped rock was used to press the mesh pot against the right hand side while another slab prevents it from slipping back. 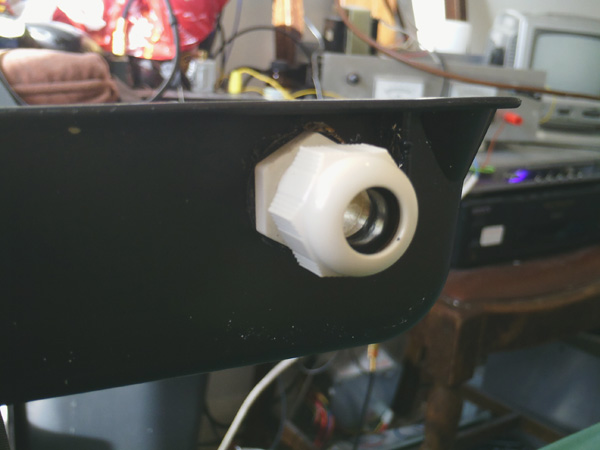 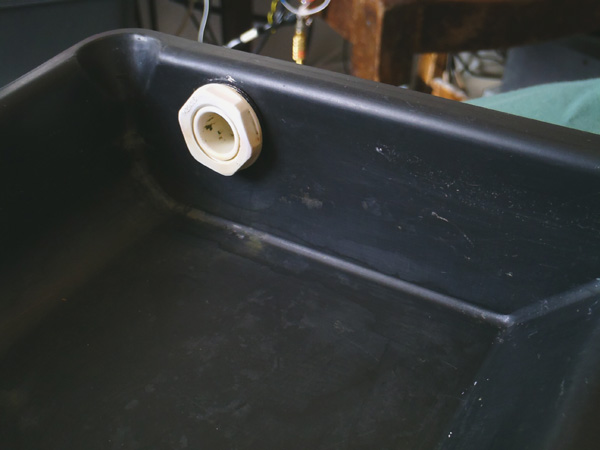 Place waterproof material on the floor beneath the tray to catch splashes.

This is the same system but with a drain pipe fitted to save carting buckets of water around the house. The outflow water pours into a large funnel into which is placed a sieve. This is necessary to prevent debris from blocking the drain pipe. It is anchored to the outlet tube with a cable tie.  The drain pipe which is connected to the bottom of the funnel can be standard 22mm piping or a flexible hose provided that the bore is large enough.

A hose or  pipe can be laid along the floor and connected to a wash-basin drain in the bathroom or into a shower pan: ½” or 13mm bore should be large enough for a short run - up to 4 metres, ¾” or 19mm for longer. Fit the pipe as low as possible to the drain for the best flow rate. This should be no less than about a metre below the level of the funnel. A small size hose or pipe can be protected with cable protector, a larger one with sections of cast iron gutter. 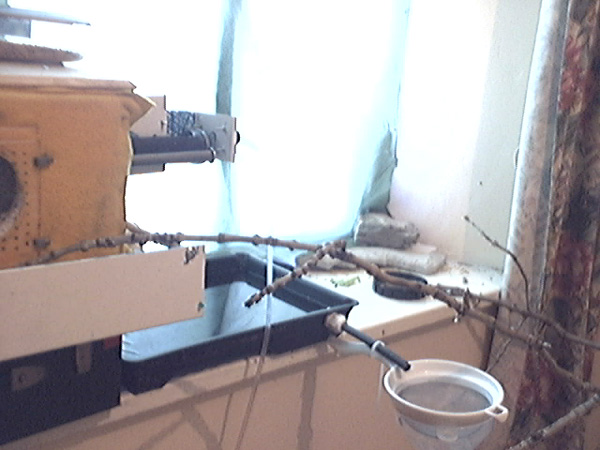 (This was later anchored to a wooden panel) 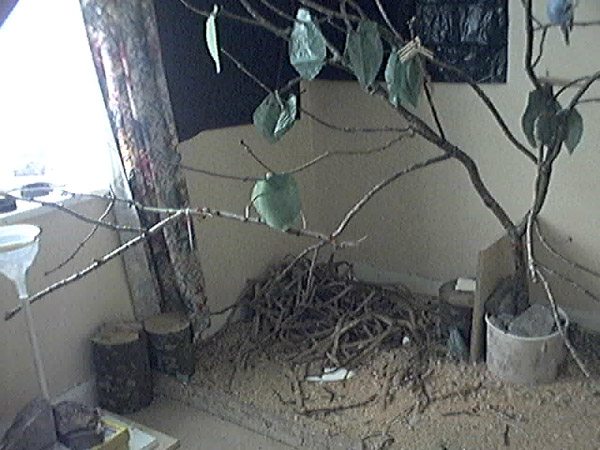 An air lock may  be necessary to prevent odours from entering the room. When a flexible hose is used as a drain pipe this can be achieved by placing an object a couple of inches high underneath the hose. This will trap water upstream and prevent air from passing. With plastic piping this is best achieved with a dedicated trap. A section of the pipe is raised using L bends (elbows) which has the same effect. The length of the raised section is not important. These measures are only necessary when the pipe completely drains.

This system automates the process of regularly manually flushing the tray. The inlet tube is connected to the water mains through an electrically operated water tap known as a solenoid valve. These are used in washing machines to fill the tub and can be single or dual valve. This is activated periodically for short periods by a digital timer to flush the water tray. This is a job for the plumber/electrician or for those with knowledge and experience in these areas. Be sure to check with your water supplier before connecting anything to the water mains.

The rising mains is fitted with a washing machine tap and connected to an isolating valve. This in turn feeds the solenoid valve which connects to the hose feeding the water tray. The original system was an experimental set-up consisting of multiple plastic tubes of different bores which also supplied water to two nests. A simpler system is described which is readily reproducible. 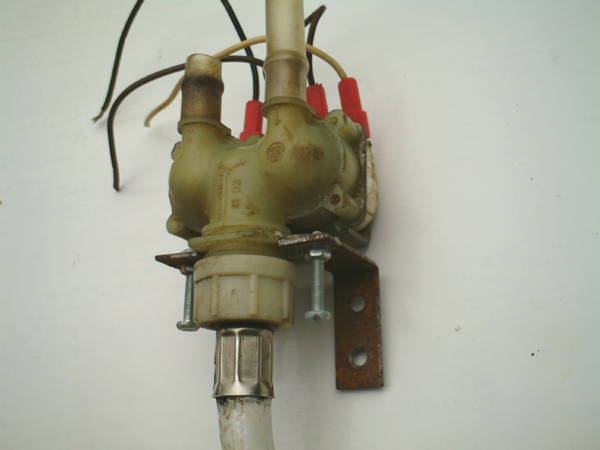 The construction of a shower facility would be simplified using these twin valves. A shower pan can be used to collect the water although this has never been tried.

Split the rising main and insert a washing machine ‘T’ valve. Connect a check valve and an isolating valve to the extra port: The check valve prevents water from flowing backwards and may be required in some areas. A flexible tap connector can then be connected to the inlet of the solenoid valve. Fit one end of a length of garden hose (12.5-13mm) to the outlet pipe using a hose clip. The far end is connected to the inlet assembly which consists of a spray nozzle and a large funnel. The spray nozzle can be fitted to the tube with a Hozelock or similar connector. Anchor the nozzle onto a piece of wood using a suitable fitting - a curtain rail bracket is ideal . The large funnel has an integral mesh filter and is fitted directly below it. This is needed to reduce the force of the water. The whole assembly can then be fitted to the wall above the water tray. Thread the hose through a second fixing further up the wall at about a metre. This will take the strain off the hose nozzle and make it more stable. Wire the solenoid valve to a mains plug using a high capacity cable. A 3 Amp fuse should be fitted in plugs which hold fuses. The solenoid valve can be housed in any convenient case and fixed to the wall near the mains water supply. Electronic stores such as MAPLIN stock a wide range of plastic and metal cases with varying degrees of “ingress protection” - resistance to dust, water and impact. An IP level of 445 or more is recommended. If the impact rating (last digit) is not given use a metal case which will need to be earthed.  If the valve is to be “hard wired” to the consumer unit use a large case and include an isolating switch. A mains neon indicator lamp would also be useful to indicate when the valve is activated.


15mm SET-UP for use with WASHING MACHINE TAP 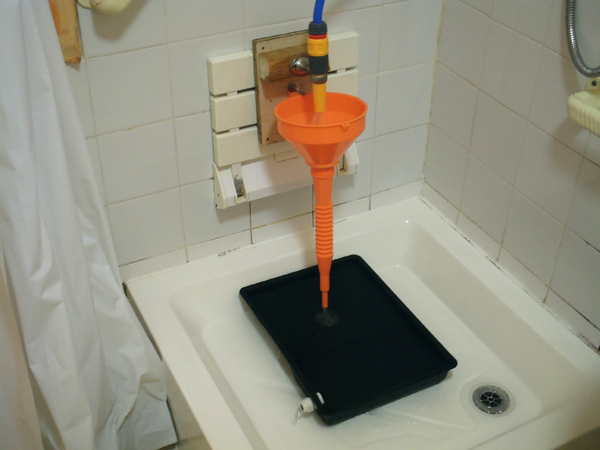 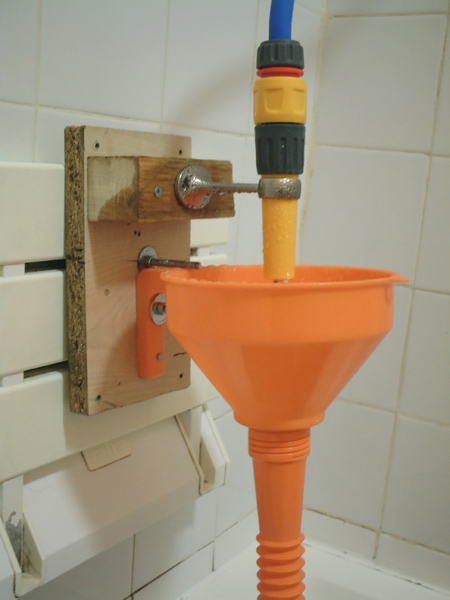 A 6mm and a 3mm machine screw secure the funnel to the board. The long bolt above the funnel is just for testing. 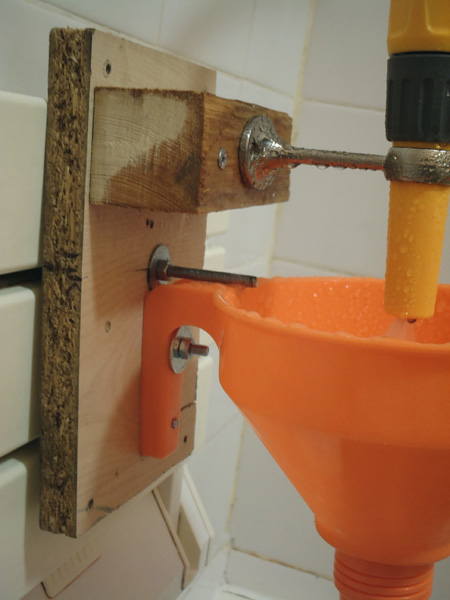 Once the board is fitted to the wall fill the tray with some water to avoid splashes. Make sure that the solenoid valve is unplugged or switched off and the isolating valve and washing machine tap are off. Turn on the water mains and washing machine tap and activate the solenoid valve. Open the isolating valve slowly until a gentle stream of water flows into the tray. Setting the nozzle to “spray” reduces splashes. Leave flowing for a while to check for leaks, overflows or any other problems.  Program the timer for the operating scheme. The BEDROOM AVIARY operated with five flushes a day for 5 minutes duration.

CAUTION: Completed system not yet tested. 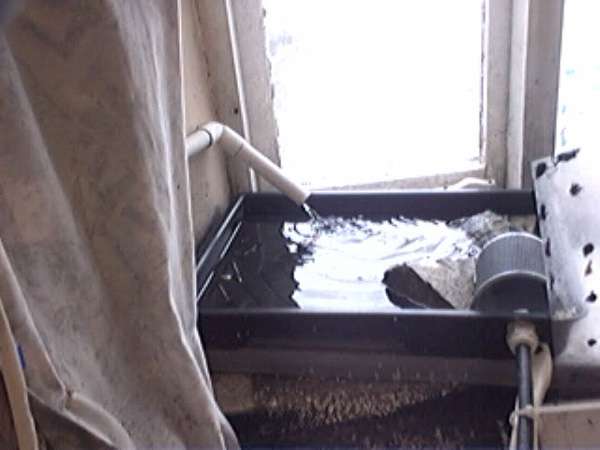