As I was walking through a passage in a nearby city I noticed a wild bird colliding with the walls and falling to the ground. I was puzzled as to what was the matter with it as it could clearly fly and the entrance was not very far away. Whilst on the ground I approached it and contrary to normal instinct it remained motionless. This is usually an indication of illness or poisoning as mice behave in the same way after taking rat poison. As luck would have it I had my fleece gloves on me which I used for handling the budgies. I picked it up and put it under my clothing to keep it as warm as possible. When I got home I put it in a small mesh pencil pot to contain it while I cobbled up a small hospital from a cardboard box and a 250 Watt infra-red lamp. The pot was ideal as it was small enough to prevent it from flapping about and transparent so that I can keep an eye on it. It took about half an hour to build as most of the parts were already built. It was slightly agitated when I put it in the box and flitted about as I checked it over but otherwise it seemed okay with no obvious indication to the problem. After it refused the liquid feed I prepared for it I provided a millet sprig and later on some crumbled digestive biscuits. It settled down a lot and became very calm and quiet. I switched off the lamp last thing at night and left the room heater on as it was clearly not sick. I named it “T6” for the records.

T6 IN THE EMERGENCY HOSPITAL 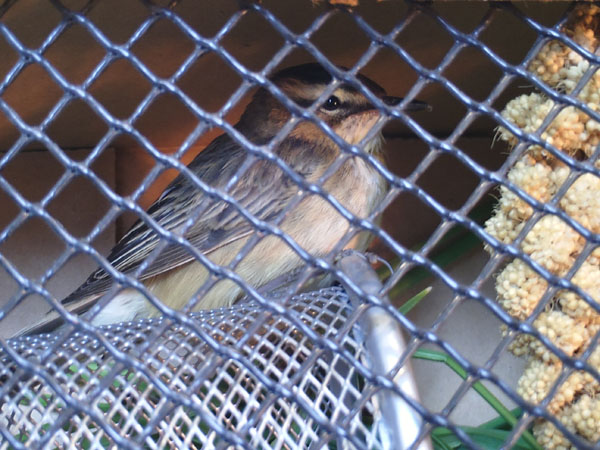 The following day I found it just as it was the night before. It was standing on the pot and it had taken a small amount of millet. I prepared the shower room for a flight test. This was the safest room as it was the only room without windows and it also had patterned wallpaper. All loose objects were removed and a towel place over the slippery shower rail. When I opened the box it flew out and tried to escape through the ceiling but didn't collide with it. It fell to the floor after striking the wall and remained motionless as before. 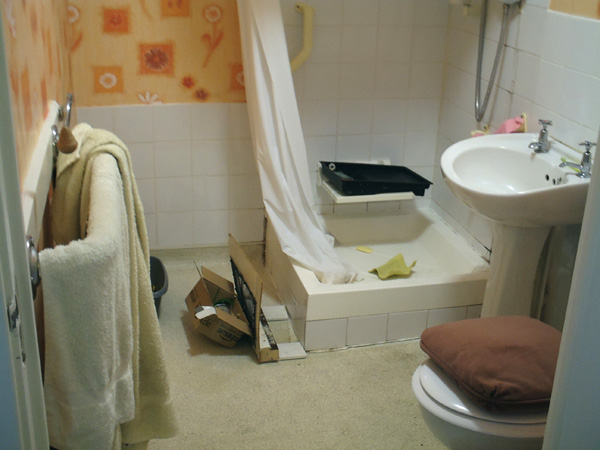 I came to the conclusion that it had wandered into unknown territory and tried to fly out through the walls of the passage which were plain painted and became exhausted. Its sight and hearing had checked out normal and it could fly and there was no sign of injury or illness. It was time to release it.

I opened the bedroom window and released my grip. Immediately it flew off to a nearby tree and fluffed out in relief! After checking out the environment for a few minutes it flew off into the

distance. It appeared to be a sedge warbler. 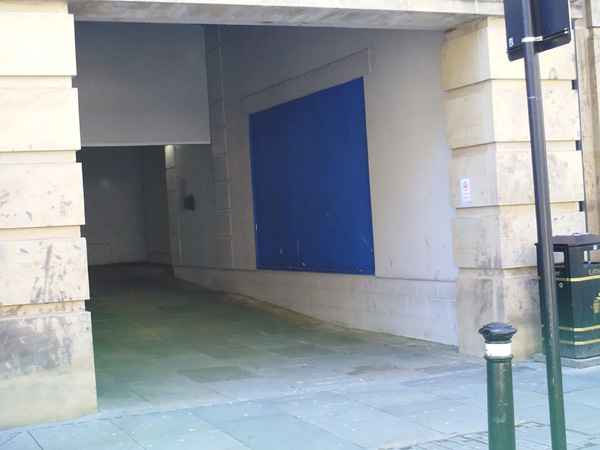 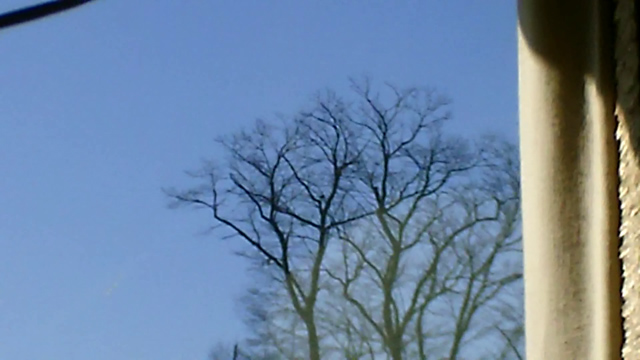 T6 composes itself before FLYING AWAY

THE COBBLED UP HOSPITAL 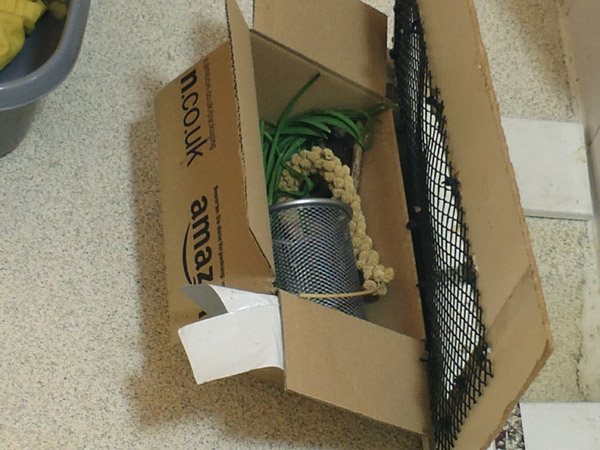 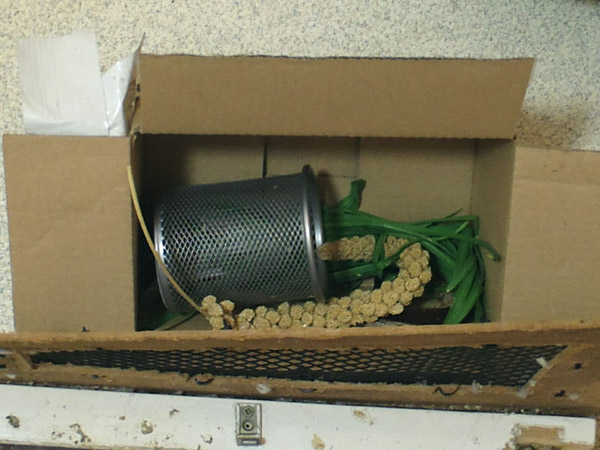 It’s far better to have such a hospital available rather than have to quickly cobble one up when the need arises. Fortunately such a facility is very easy to construct and uses simple materials.

As the bird will only be contained for a short time a simple cardboard box and a piece of hardboard can be used. A square window is cut out of the front of the hardboard and covered with gutter netting. Over this is placed a layer of thin polythene to keep the heat in. The above unit used a piece cut from a freezer bag. It is simply taped over the window at four points. This will leave small gaps along the edges which are needed for ventilation. Mount the board on a suitable stand and fix the box to it. Insulate the box with thermal fleece and cover with bubble wrap. The bubble wrap improves the insulation and prevents claws from getting snagged on the fleece. The mesh pot is 10cm tall and 8cm in diameter and should be covered with black paper. This will give the bird shelter from the lamp to allow it to sleep. Fit a digital thermometer to the base of the pot. Make sure the thermometer is not directly illuminated by the lamp as it will give a false reading. A small water bottle can be strapped to the front using cable ties but provide a tray for a wild bird. 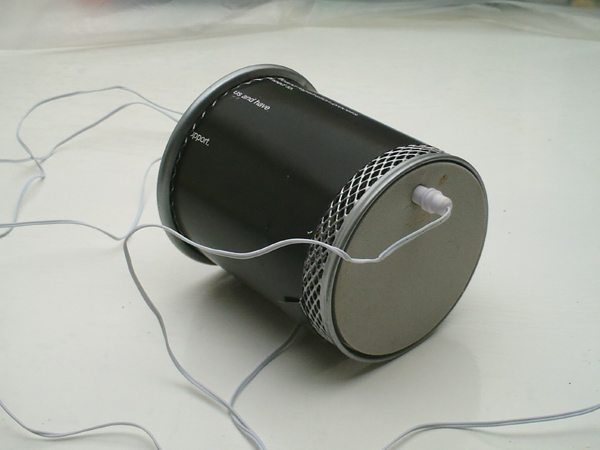 The pot can be anchored to the floor of the box with string or hook-up wire. A water tray which can easily be removed yet stable in the box can be made from a small tin can. Drill a 3mm hole in the lid which will function as the base for the water tray. Use a countersunk screw to give a low profile. Fix it below the water bottle nozzle to catch the drips and thoroughly clean the can. 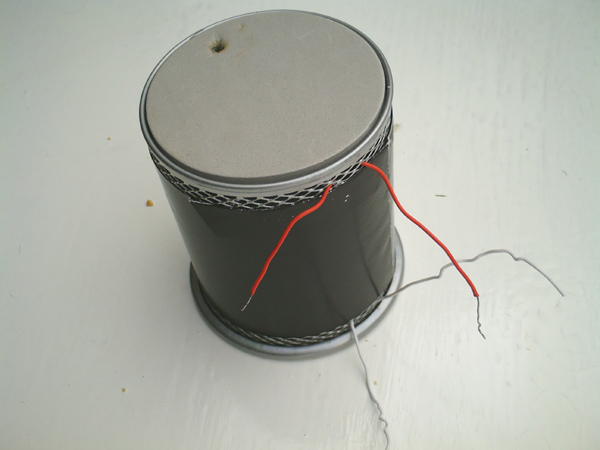 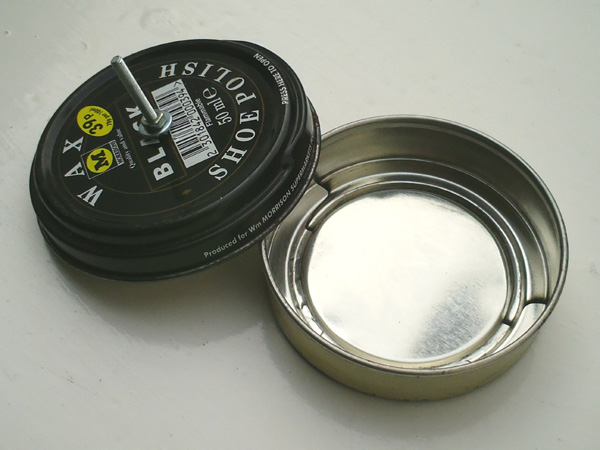 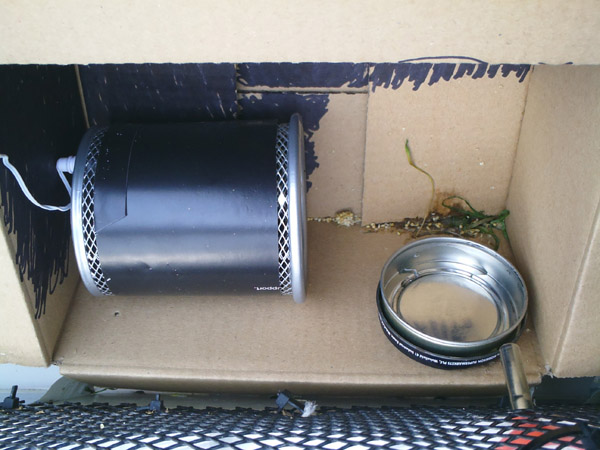 Situate the hospital 80cm from a 250 Watt clear infra-red lamp. With lamps of other ratings the distance will need setting. After around 45 minutes the temperature should have stabilized and be about 10 degrees above ambient. With a normal room temperature of say 20 degrees the hospital will be at 30 degrees Centigrade which is fine for a run down bird or those with not so serious conditions. For critical conditions a dedicated hospital is needed as the bird will need nursing and may need to be confined for a few weeks.

SETTING THE DISTANCE FOR OTHER LAMPS:

For a 300 Watt lamp start off with the lamp at one metre from the box. Leave for 45 minutes monitoring the internal temperature continuously. Aim for 32 degrees Centigrade and adjust the distance accordingly. Higher power lamps or those less than 250 Watts are not recommended.

On no account use standard light bulbs to make up the power as these emit the wrong spectrum.

THE COBBLED UP HOSPITAL UNDER TEST 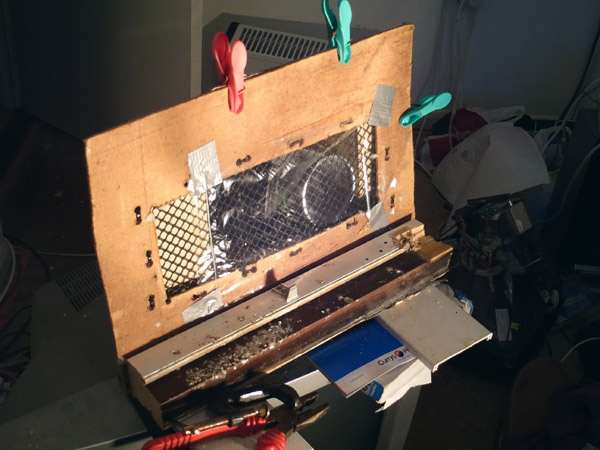 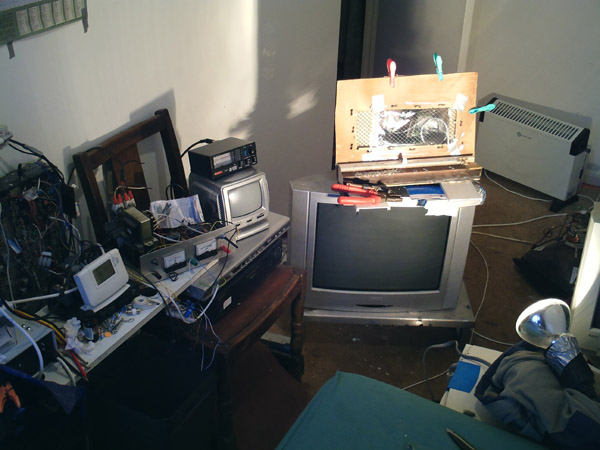 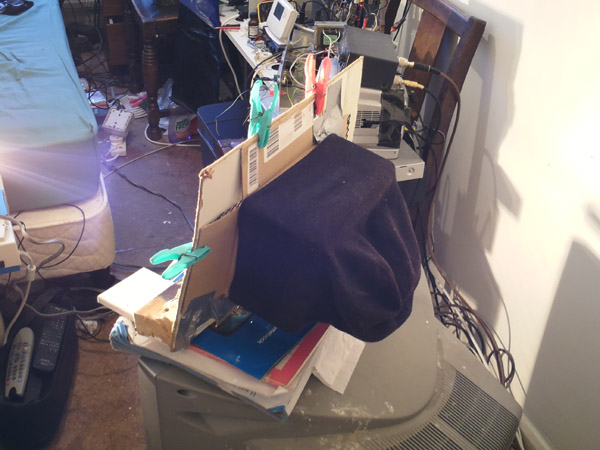 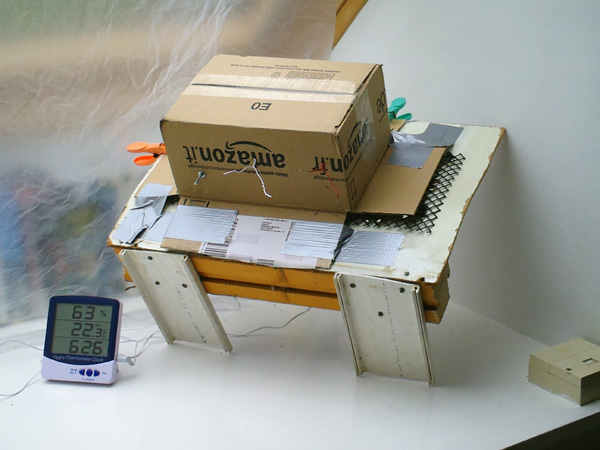 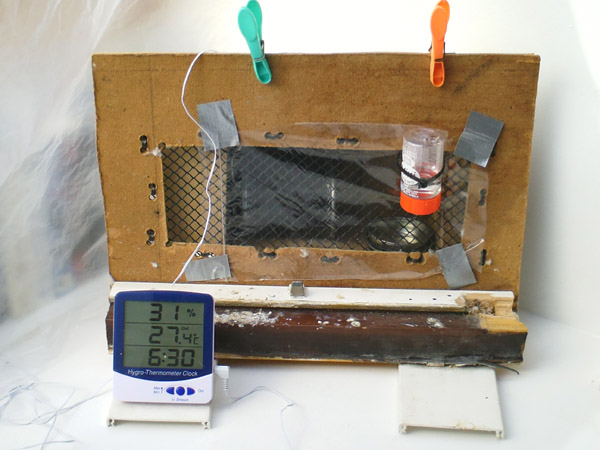 Sprinkle loose seed on the floor of the box and provide a millet sprig. Monitor for an hour or two noting its behaviour and the interior temperature. At no time should the temperature exceed 35 degrees Centigrade. Be sure that the box and lamp are securely mounted and that no objects can obstruct or fall on the lamp. If the temperature has stabilized and the bird calm the unit can be left to do its job. Summon a vet if available.

a) Make the black paper covering the pot narrower. This will expose more mesh for the bird to grip on.

b) Make the length of the hardboard the same as the length of the box with the flaps open. This will allow it to be closed with pegs and obviate the need of adhesive tape which can startle the bird when removed.